To overcome this issue, do the following 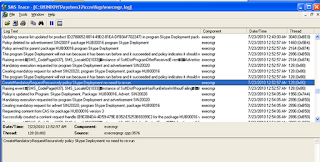 Once the above is done, you may re-run the advertisement and to expedite the process you may like to refresh the machine policy on the target machine.
Posted by Vincez76 at Wednesday, February 08, 2012

Email ThisBlogThis!Share to TwitterShare to FacebookShare to Pinterest
Labels: SCCM

Connect to me on Linkedin